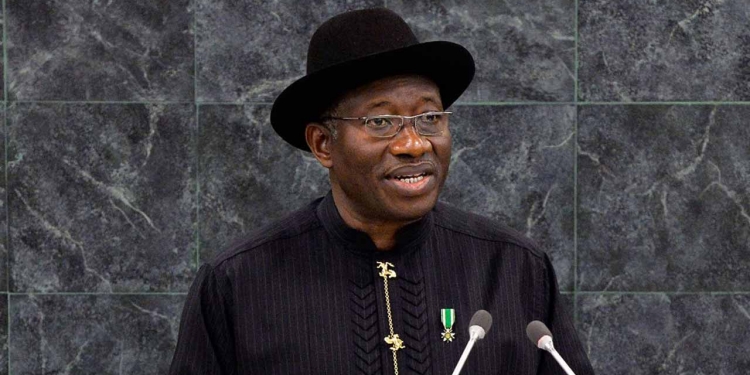 A socio-political interest group the Voice of South-South (VOSS) on Saturday joined the call for former President, Dr. Goodluck Jonathan to contest the presidential poll in 2023.
The group said its call was premised on Jonathan’s competence to tackle the nation’s current socio-political and economic challenges that have given rise to poverty, conflicts, violence, corruption, distrust, tribal sentiments amongst others.

They made the call in a communique read by its Chairman, James Boss-Anyama in Yenagoa, Bayelsa capital after a meeting of members drawn from the entire Niger Delta rejoin.
VOSS noted that judging by the array of politicians jostling for the nation’s presidency, Jonathan stands out as the only man with an honest and lasting solution to the nation’s economic and political woes.

The group stated that at this critical point with the nation’s economic woes, a four-year term for President Jonathan will benefit the whole of Nigeria not just the North as wrongly perceived from some quarters.
It further dispelled insinuation that Jonathan’s presidency is a Northern agenda for the purpose of regaining power after four years.

VOSS explained that Nigeria at this point in time needs a short time redemption-focused mission with a four year purposive and pragmatic national rebirth agenda geared towards addressing the lingering challenges before it.
The VOSS Chairman explained that giving former President Jonathan the singular privilege of being the ruling party’s consensus candidate for the 2023 Presidential election is in line with the yearnings of the generality of Nigerians.


He said that a cursory look of all aspirants for the office of the President, Jonathan is the only one that has been tried, and trusted.
Boss-Anyama described Jonathan as detribalized, unassuming, humble, un-amendable to the lures of power and a lover of Nigerians irrespective of tribe and religion.

“A Goodluck Jonathan’s presidency will not only transform Nigeria but will align with best practices across the nations of the world.
“It is not a strange idea in that many world powers like the United States of America had within their political history brought back former leaders and are still doing so in quick succession like in the case of Israel.

“For us it will be significant and will bring international recognition and respect to our nation only comparable to the likes of South Africa’s four year development and national advancement under the leadership of Nelson Mandela.” VOSS stated.
The group admitted that it was aware of the yearnings of a particular region for the presidency on the grounds of equity and fairness.
The group however submitted, but that fielding a tested hand to take the country out of the woods should be over and above the principle of equity and fairness.

Some facilitators and enumerators interviewed, Amanda Litini Apatak and Felix Ajuda, applauded the National population commission for allowing them to serve, saying that they have learned a lot with two days of their training.
See also  Anambra 2021: Parties Yet to Flag off campaigns after INEC blew the whistle
Continue Reading