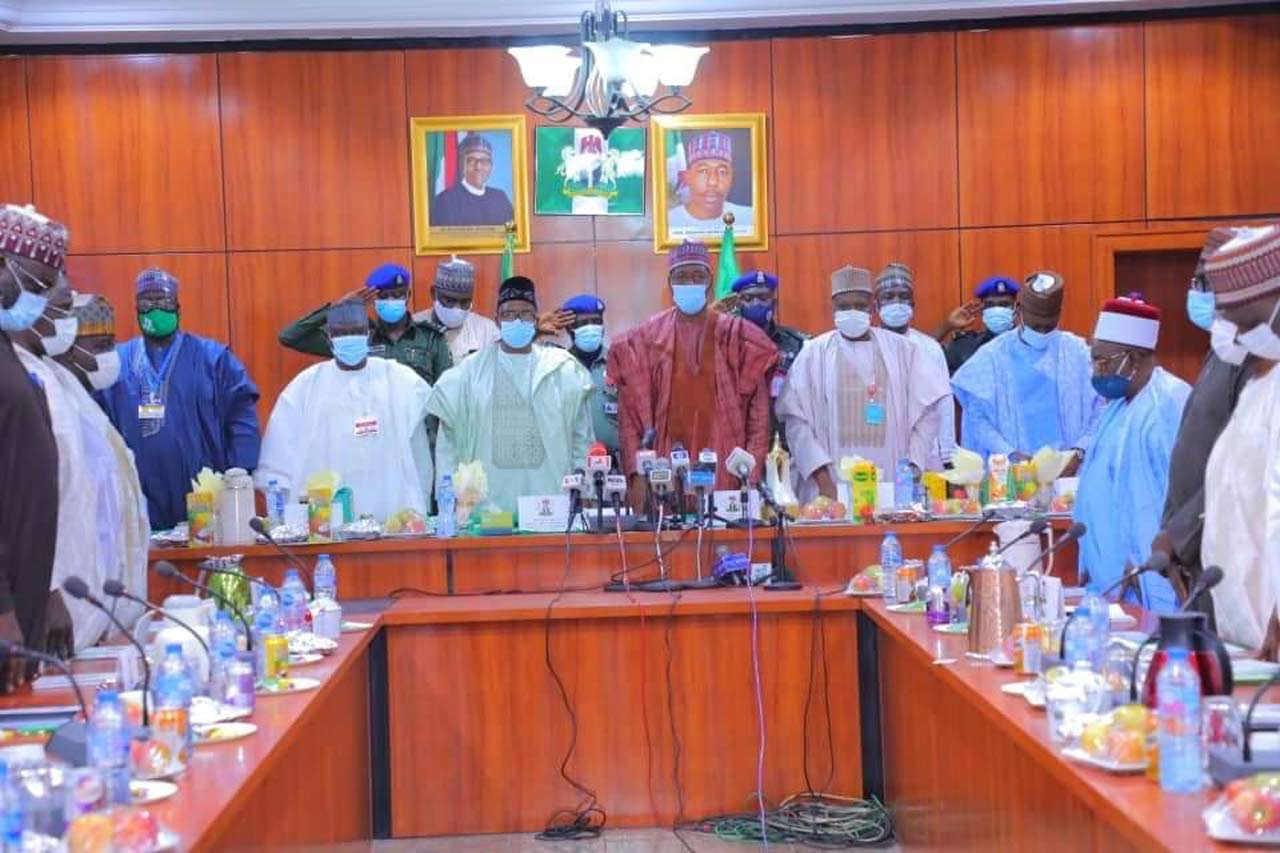 Governors  in the Southern part of the country, comprising the South-West, South-East and South-South, under the aegis of Southern Nigeria Governors Forum (SNGF), yesterday met and resolved that everything possible must be done to ensure non-disintegration of the country.

A source said the governors deliberated on how to stop the nation from degenerating into anarchy, in view of the high level of insecurity across country.

They called for commitment and unity in addressing issues affecting the country, particularly the Southern Nigeria, stressing the need to put the country first in the face of trying times.

The governors also resoled to meet in Asaba, Delta State, next week to harmonise positions aimed at dousing the tension in the country.

and Recreational Services Employees (AUPCTRE) has accused the

Abubakar of abuse of power and high handedness.

Secretary General, Musa Ukpo and addressed  to the Chairman, Code of

of the Director, Investigation and Monitoring of the Code of Conduct

Part of the petition read in part: “Staff of the Corporate Affairs

Commission (CAC) under the auspices of Amalgamated Union of Public

Employees (AUPCTRE) have petitioned the National Assembly and the Code

of Conduct Bureau (CCB) and the Presidency over allegations of

corruption and victimisation against the Registrar-General, Alhaji

The petition added that, “It has been discovered that the Registrar

“There is an alleged financial impropriety with regards to the cost

The payments were made to Major Academy Ltd of No. 22, Isyaku Avenue,

off Liberia street, Kaduna State in two installments. The first was on

The union further alleged that the Registrar General of CAC also

for the procurement of the Company Registration portal (CRP) software

and provision of software support and maintenance to Oasis Management

AUPCTRE further alleged that the Registrar General also awarded a

for the office of the Registrar General.

They also accused him of taking unilateral decisions in matters that

despite the availability of funds and budgetary provisions,  stoppage

of all staff loans schemes, including those of the cooperative

societies as well as coercing of staff to forcefully resign their

union of his choice, in addition to carrying out auctions of

unserviceable/obsolete vehicles of the CAC without due process hence

in breach of the Constitution.

“The promotion examinations for 2019 and 2020 in the commission were

commercialised. Vacancies were not declared in Human resources and

Finance departments in the appropriation year yet he filled the

Vacancies with his favourites against the budgetary provision, thus a

breach of the appropriation act.”

AUPCTRE in a second petition to Prof Ibrahim Gambari, the Chief of

Staff to President Muhàmmadu Buhari,  dated 5th of March, 2021, the

illegally dissolved the union and banned all it’s activities.

The petition titled ” The struggle of AUPCTRE against corrupt

the Registrar General of “illegally dissolving the union executive and

banning them from operating and transfer of all executives to

different parts of the country to weaken the union.

“The Registrar General, it was gathered  that while the nation was

under lockdown during the COVID-19 pandemic allegedly siphoned over

staff that were working from home then.

“As if that wasn’t enough, the Registrar however, went ahead to spend

another whooping sum of N35 million fumigating the agency’s

environment because of the COVID-19 pandemic in addition to

Meanwhile attempt to get reaction from the Registrar General failed as

allegations, was not replied to two weeks after.

Benue State Governor, Samuel Ortom has vowed to take action against the unabated attacks by herdsmen in his state.

He said it is time to stop crying over herdsmen attacks and take action against them.

Ortom stated this during a media parley at the state’s Government House in Makurdi on Saturday.

He stressed that his administration would take steps to protect the people of the state from marauding killer herdsmen.

Ortom also insisted that his administration would not repeal the anti-open grazing law in the state despite the attacks by herdsmen.

He said the attacks would rather push his administration to strengthen the law against open grazing.

“A few weeks ago, Benue stakeholders met and gave this administration the mandate to activate and implement the Community Volunteer Guards Law enacted in 2000.

“We have already commenced the process of recruiting responsible people of 50 years and below into the Volunteer Guards.

“Their duty is to support the conventional security agencies in defending their communities. We have cried enough. We will cry no more. Now is time for action,” Ortom said.

…June 12 Rally Fails in the North

The Arewa Youth Consultative Forum (AYCF), has expressed the fears that the 2023 general elections may not take place in the country as a result of the spate of insecurity in parts of the country.

President of the forum, Yerima Shettima, who spoke in Kaduna at said there are indications that some people were behind the uprising in some parts of the country and are against Nigeria’s unity.

According to him, such people feel they are out of the game and want to be part of it by any means.

“I have a lot of fear for 2023 because the signs have shown that we may not see 2023 until the government of the day begins to arrest the present challenges Nigerians are facing and do the needful so that anybody found to violate the laws of the land by organizing something that is not lawfully and that is not in the constitution and anything that threatens the unity of the country, the government should be seen to act decisively to find the sponsors of the madness.

“We should all think of the country first before any other thing. There is a need for dialogue for peaceful coexistence in the country.”

“This journey has come a long way and we may not have free and fair elections in the near future where these sentiments exist because we are being divided every day and the unity of the country is being threatened.”

He lamented that the past 22 years of Nigeria’s democracy has not been smooth as one had expected.