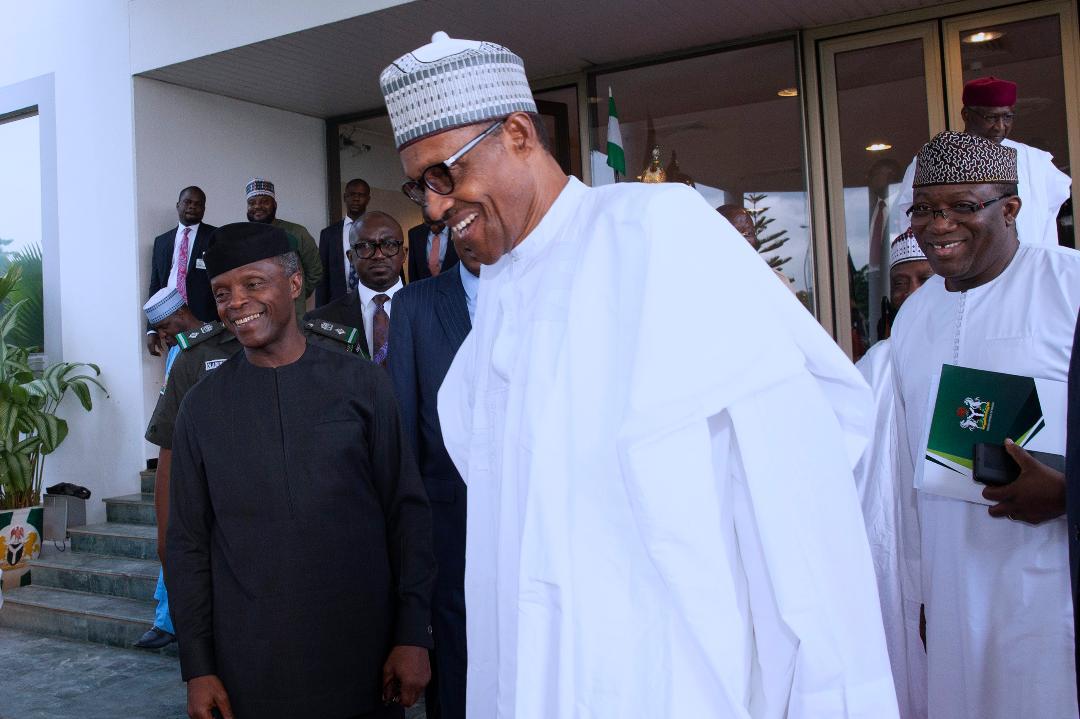 At last, President Muhammadu Buhari Wednesday, inaugurated a new cabinet for his second term in office, three months after his inauguration on May 29, 2019.

The President commenced the event with the administering of oath of office on the reappointed Secretary to the Government of the Federation (SGF), Mr Boss Mustapha, and the 43 Ministers who are now part of the Federal Executive Council (FEC).

It was also witnessed by family and friends of the new ministers; APC national leader, Bola Ahmed Tinubu; Governor Kayode Fayemi of Ekiti State; Governor Gboyega Oyetola of Osun State; the Chief of Defence Staff and military service chiefs, as well as the Inspector-General of Police.

Also present was the embattled Head of Service of the Federation, Mrs. Winifred Oyo-Ita, who is being investigated over an alleged N3billion fraud by the Economic and Financial Crimes Commission.

She had been absent from public functions in the past few days, particularly the induction retreat organised for the incoming ministers in Abuja, at which she was listed as one of the resource persons.

President Buhari in his remarks, charged the ministers to work closely and harmoniously with fellow cabinet members as well as with the Permanent Secretaries in their respective Ministries.

This, he said, has become necessary considering the fact that, the task of moving the country to the Next Level requires dedication, focus, and collective efforts.

He reminded them of his earlier charge to channel cabinet memos through the SGF and requests for meetings and presidential matters through his Chief of Staff, Abba Kyari.

Buhari warned that failure to follow appropriate vertical and horizontal channels of communication in the work of the cabinet among them would be sanctioned with requisite repercussions.

The President said: ”The core objectives of this Administration are to improve security, achieve diversified, inclusive economic growth and fight corruption. I am convinced that we can build a buoyant economy that supports inclusive growth and creates broad-based prosperity for every Nigerian – one that will absorb the two million Nigerians entering the labour market each year, as well as reduce the backlog of over 20 million unemployed or underemployed Nigerians.

”We must also intensify efforts to reduce internal security threats and eliminate corruption at all levels so as to ensure that our citizens have a safe and corruption-free environment where they can live and conduct their businesses, without fear and intimidation.

All these are only possible if we are relentless about delivering on the priorities that are vital to our overall objectives – and on the specific actions and targets that have been identified to guide policy direction and implementation as specified in our roadmap.

We have also agreed on the appropriate Key Performance Indicators and deliverables to be achieved in the road map on Government priorities – 2019 – 2023.

”I am pleased to note that at the end of the retreat, we have agreed and prioritized the key strategic initiatives required to drive socio-economic growth in our country, which must be accomplished, because the people of Nigeria expect nothing less from us.

”Our primary business over the next four years is to work together towards delivering the results that the people of Nigeria expect from us.  We have a great opportunity as an Administration to build on the progress already made in order to fundamentally shift Nigeria’s trajectory on the path of steady growth and development.

”While recognizing the existing challenges, and the urgent need to surmount them, we must not fail to note the progress we have made since inception.

”Our economic policy, which is the Economic Recovery and Growth Plan, is still robust and on course with the necessary policies and initiatives to sustain the country’s exit from recession, engender growth and promote the value chain of infrastructural development.  We believe that we can sustain our legacies and developmental strides if they are based on sustainable policies and good governance.”

While assigning portfolios to the Ministers, Buhari announced three new Ministries, namely Ministry of Police Affairs, which he had scrapped in 2015; Ministry of Special Duties and International Affairs;  as well as Ministry of Humanitarian Affairs and Disaster Management.

The Ministers who were sworn-in in groups of fives and three, making a total of nine batches; were seven female and 36 male Ministers as screened and cleared by the Senate last month.

Meanwhile, a one-minute silence and special prayer were observed in honour of late Mr. Tijani Yusuf, the President’s Senior Special Assistant on General Duties, who died two weeks ago; before the new Ministers took a group photograph with the President.

Names of Buhari’s Ministers and Their Portfolios