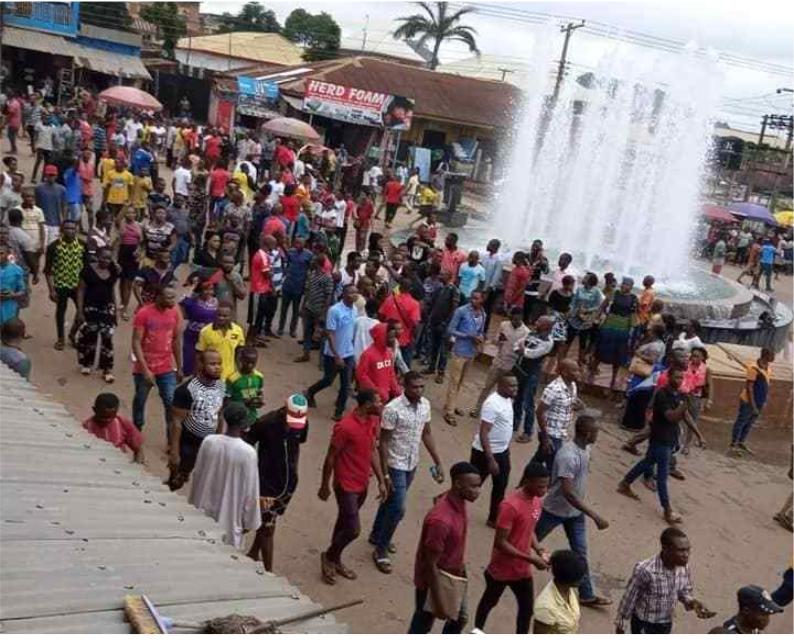 Several people on Wednesday 28th August 2019 in Abakaliki sustained various degrees of injuries as traders at the Abakpa Main Market, Abakaliki clashed with suspected revenue agents drafted to enforce payment of tax in the market.

Some of the victims including Messrs Uchechukwu Nkwegu, Sunday Awoke, Patrick Eze among other traders are currently receiving treatment at the Federal Teaching Hospital, Abakaliki.

Odah said that armed policemen had been drafted to the market to maintain law and order, adding that the police had launched preliminary investigation into the incident.

She confirmed that one of the traders was left unconscious after the clash but was revived by doctors.

Dave Umahi on Internally Generated Revenue went into the market for tax collection.

She said that in the statement deposed on oath by Ukwuegbu, some of the affected defaulters resisted and began fighting with the revenue agents.

“According to the SA to the governor on IGR, trouble started when revenue defaulting traders at the market refused to pay their tax to the agents who came to collect it.

“The SA said that expected IGR from the market has been on the decline due to refusal by shop owners to remit taxes to appropriate government revenue accounts.

“So, the SA and the revenue agents moved into the market to enforce compliance and to get defaulters to face approved sanctions after the defaulters have failed to honour series of invitation and papers served on them to come and explain their non-compliance.

“The revenue agents went into the market to identify those ones who have refused to pay and to seal their shops.

“They have succeeded in sealing about seven shops when clashes began.

“In the process of the clash, one person was confirmed seriously injured and currently on admission at the Alex Ekwueme Federal Teaching Hospital, Abakaliki.

“The Commissioner of Police quickly deployed two Assistant Commissioners of Police and a tactical team to the market to restore order and sanity.

“Everywhere is now calm and normalcy has returned to the market and we have launched investigation to ascertain the cause of the clash,” Odah explained.

She said that preliminary reports obtained indicated that the traders were agitating against alleged government imposition of leaders on them.

“We, the police will investigate because we have different reactions from traders at the market.

“One was the allegation that one Mr Peter Oba was allegedly imposed on them but when we asked government, they denied any imposition of leadership on the traders.

“Government said that the tenure of the former executive expired and in order to avoid any vacuum, an interim leadership was put in place pending when substantive executive will be elected and inaugurated to pilot affairs of the market.

“Again, the traders alleged a witch-hunt because they dragged government to court to challenge quit notice and revocation of lease-hold order served on them by government.

“But government through the SA to the governor on IGR denied the allegation saying that they were in the market to enforce revenue payment compliance,” Odah added.

Meanwhile, some traders at the market who spoke with NAN including Chief Emeka Uba, Sabastine Achaniru and Dandy Ogbonnaya condemned the clash and called for unbiased police investigation into the incident .

The traders alleged that many of them were severely injured, shops vandalised and goods worth millions of naira allegedly looted by the suspected revenue agents.

They said government served them quit notice and revocation of their lease-hold order and had already gone to court as peaceful and law abiding citizens to challenge the government action.

The traders said their lease-hold with the Ebonyi local government council was 30 years and they still have 12 years remaining.

Oba, the interim market chairman when contacted for comments, declined to speak. (NAN)

Buhari Not Giving up on Leah Sharibu – Shehu