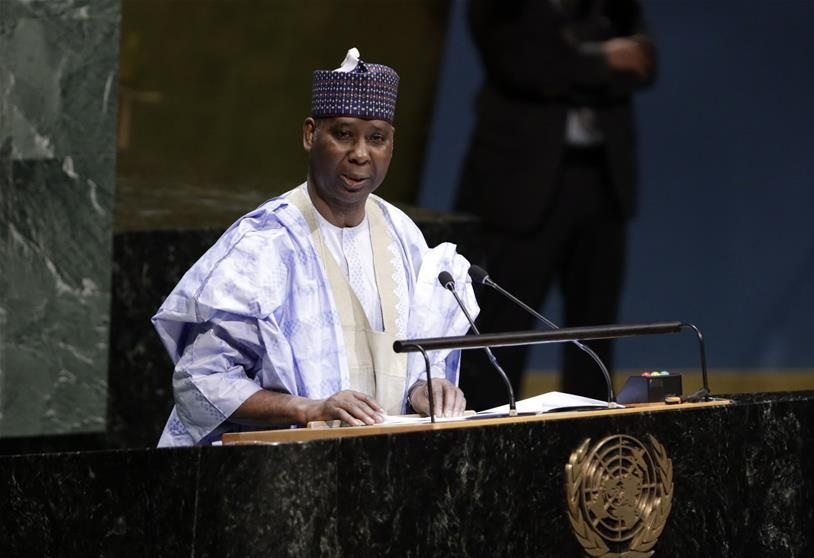 President-elect of UN General Assembly and Nigeria’s Permanent Representative to the UN, Ambassador Tijjani Muhammad-Bande has that the fight against corruption, poverty eradication, climate change and education would be the key focus point of his administration at the United Nations.

The Permanent Representative who outlined his vision statement for the UNGA Presidency, stressed that the fight against corruption and return of assets to the countries of origin are on the agenda.

Speaking to State House correspondents after he met with President Muhammadu Bihari on Thursday at the Presidential Villa, Abuja, Amb. Muhammad-Bande said  his election as the 74th President of the General Assembly was successful because of the leadership in Nigeria and the unflinching support of African countries.

He promised to give a good account of the country, adding that issues of great importance to Nigeria including peace and security, poverty eradication, education, inclusion and climate action, particularly on the Lake Chad region,  would be on the front burner of his presidency.

His words: ‘‘The election of Nigeria or a Nigerian into an international position can only happen if what is happening at home has the confidence of the international community.

‘‘The  fight against corruption has already gained traction, under the leadership of Nigeria at the United Nations, discussions on combating illicit financial flows, the fight to return assets to the countries of origin, have been led effectively by Nigeria with the support of many countries, especially Norway.’’

Meanwhile President Buhari has formally congratulated the UNGA President urging him to justify the confidence reposed in him by Nigerians and the world.

Receiving Amb. Bande at State House, Buhari said: “You have intellectually prepared yourself for this position, well experienced in the field and unanimously elected by your peers. You must now justify the confidence reposed in you by Nigerians and the world.’’

The Nigerian Diplomat was on his first visit to the country since he was elected by acclamation as the 74th President of the General Assembly on June 4, 2019, in New York.

The President further told the Permanent Representative: ‘‘I believe you have earned the respect of your colleagues and I appreciate your coming to see us.’’