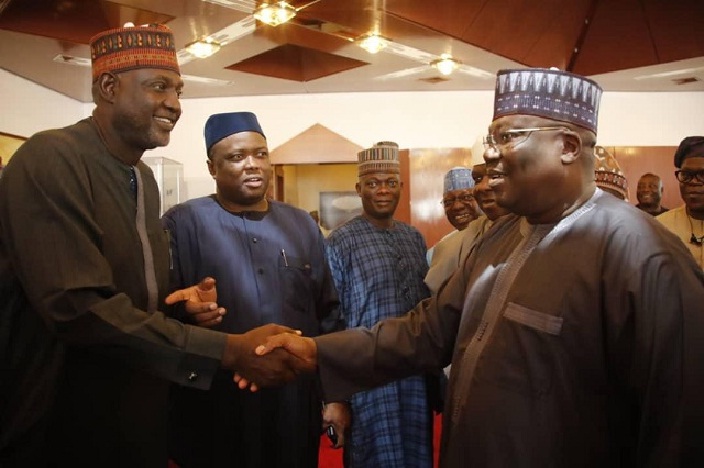 The President of the Senate, Dr Ahmad Lawan, has said that the ninth National Assembly (NASS) is more prepared to work for Nigerians, with the recent constitution of the standing committees.

Lawan made the promise in a statement signed by his Special Adviser on Media, Mr Ola Awoniyi, in Abuja on Thursday 15th August, 2019.

The statement quoted Lawan making the remark at the Nnamdi Azikiwe International Airport, Abuja, shortly on his return from this year’s Hajj (pilgrimage) to Makkah, Saudi Arabia, in the early hours of the day.

He was said to have been received on arrival by Senators Barau Jibrin, Michael Opeyemi Bamidele and his Deputy Chief of Staff, Mohammed Karage.

He said: “The ninth National Assembly has been properly constituted, especially with our committees in place.

“We are ready, we are willing, we are capable, we are enhanced to work as an institution, to ensure that we provide those ingredients and inputs that the executive would want for it to implement laudable projects to develop the country.

The News Agency of Nigeria (NAN) recalls that Lawan departed Abuja on 5th August, 2019 to perform the Hajj, the first since his emergence as the President of the Senate.

The statement said Lawan was full of gratitude to God for the opportunity to be part of the over 60,000 Nigerians that participated in the pilgrimage.

“We prayed for our country to achieve optimal security, to have stability, peace and progress.

“Nigerians in Saudi Arabia came together with other Muslims worldwide to pray for global peace. I’m sure that with the message that we heard as part of this year’s pilgrimage and Eid generally, is a message of sacrifice, brotherhood and unity.

“Nigerians should thank God that we are still together, as such we should work to ensure that the unity of this country is not compromised,” Lawan said.

The president of the senate urged Nigerians to continue to pray for their leaders, pointing out that “leaders are meant to serve the people, and no leader would like to deliberately fail to perform.

“Also, in times of challenges like we are going through presently, Nigerians should continue to be behind their leaders with prayers and support, backed by understanding, and by the Grace of God, Nigeria will reach those great heights that for long we have prayed for”.

Lawan reiterated his appeal to the executive arm of government on the need to be on the same page with the NASS to reverse “the undesirable trend of the current budget cycle in Nigeria”.

“We need to work for a budget that will be passed by the National Assembly by December.

“That requires that we work assiduously with the executive arm of government, to have the budget laid before the National Assembly by the end of September, and for the National Assembly to lock up the whole of October this year for budget defence, so that it can be processed and passed before we go on Christmas break.

“It is doable, it is achievable and attainable.

“I’m sure if we are able to achieve that, Nigeria’s economy will witness a boost. Businesses in Nigeria will have something predictable to work with.

“I believe that together with the executive arm of government, we should be able to do this, as this is fundamental to us in the National Assembly, and I’m sure the executive arm is also looking forward to that,” Lawan said.