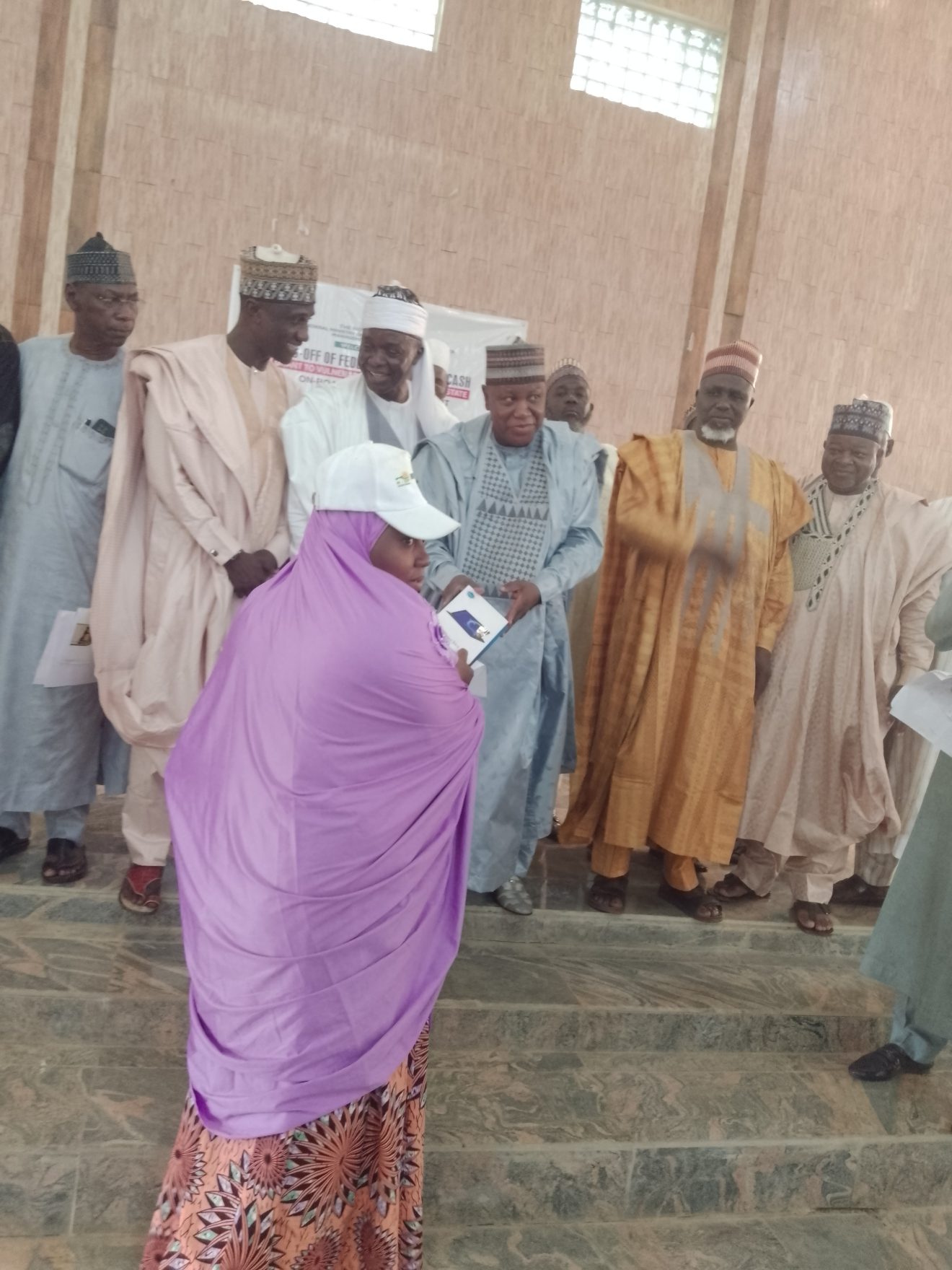 Minister of Humanitarian Affairs, Disaster Management and Social Development, Hajiya Sadiya Farouk, disclosed this while inaugurating the disbursement of Cash Grant to Vulnerable Groups (GVG) on Tuesday in Sokoto.

Farouk, represented by the National Coordinator of NSIP, Dr Umar Bindir, said the figures were being expended on different categories of empowerments targeted at enhancing the livelihoods of Nigerians.

According to her, Federal Government under the leadership of President Muhammad Buhari, designed effective schemes to give a lifting hand to some of our poorest and vulnerable citizens in our country.

” Programmes were being implemented in close partnerships with the State Governments and the effort is a clear demonstration of our collective commitment to address poverty which is the core developmental challenge confronting us as a people.

She said on the inception of President Buhari’s Administration in 2015, it inherited a National Poverty Incidence level averaging 70 per cent, according to National Bureau of Statistics (NBS).

She said since then, the Federal Government had paid more attention to generating solutions to address the plight of the poor and vulnerable in the country.

” Despite other economic challenges the Administration inherited at the time, this informed the decision to initiate the National Social Investment Programme (NSIP) in 2015.

” This as a strategy for poverty reduction and enhancing social inclusion among our people, especially the women in rural areas, ” the minister said.

The minister added that since the commencement of NSIP in 2016, it had impacted positively on many lives of the poor and vulnerable in Nigeria.

” I have personally witnessed the life-changing experiences on people who, hitherto, lived below the poverty line and those that are vulnerable to shocks, but are now living better lives.

” It is consistent with President Buhari’s deliberate National agenda of lifting 100 million Nigerians out of poverty in 10 years. ”

She noted that GVG was designed to provide a one-off grant, a cash grant of N20,000 to some of the poorest and most vulnerable Nigerians in rural and semi-urban areas across the 36 states of the federation and the Federal Capital Territory,

Farouk added that there were no fewer than 5,815 GVG beneficiaries from the 23 local government areas of Sokoto state.

She stressed that the figure was the highest slot in the country because statistics showed that the highest poverty incidence was actually in the state.

The minister also distributed engagement letters to Independent Monitors of the schemes and started the Digitised Cash Transfer Payment system for the Conditional Cash Transfer Programme.

She noted that the import of the exercise was to create room for reliable, transparent and accessible database for seamless disbursements.

The State Focal Person, Alhaji Musa Girki, said 70 per cent of GVG beneficiaries were women, while the remaining 30 per cent were youths, based on presidential directives.

Girki said 15 per cent of the total number of beneficiaries were specifically allocated to citizens with special needs, including Persons With Disability (PWDs) and Senior Citizens in the sate.

Gov Aminu Tambuwal said the target of the Cash Grant project was to increase income and productive assets of the target beneficiaries.

Tambuwal, who was represented by the Commissioner for Animal Health, Prof. Abdulkadir Junaid, said it was highly expected that the beneficiaries would use  the grant to improve their productivity, create wealth, generate employment and improve their living standard.

He noted that cash grants to vulnerable groups and Conditional Cash Transfer were good strategies to address poverty and provide social safety nets for vulnerable individuals and households.

Tambuwal reiterated that his administration would continue to enter into strategic partnerships that would provide succor to the less-privilege in the state, to move them to prosperity.

A cross section of the beneficiaries, who spoke with newsmen, expressed happiness over the gesture and promised to make wise investments to support their families’ living conditions. (NAN)

The Central Bank of Nigeria (CBN) on Tuesday raised the Monetary Policy Rate (MPR), also known as interest rate, from 13.5% to 15.5% as a way of tackling inflation.

CBN Governor Mr Godwin Emefiele made the annoucement at a media briefing after that Monetary Policy Committee meeting in Abuja.

This is the highest rates adopted by the CBN after it held the Minimum Rediscounted Rate (MRR) at 15 per cent on August 17, 2003.

The MRR was the rate adopted by the CBN until it introduced a new Monetary policy framework in 2006 which replaced MRR with Monetary Policy Rate (MPR).

The CBN governor, who spoke after the 287th MPC meeting, said its decision was a move to save the naira and curb inflation, adding that the members voted unanimously to raise the rates.

Benchmark lending rate was as low as six per cent thirteen years ago in 2009.

Currently, Nigeria’s inflation is at 20.52 per cent according to the National Bureau of Statistics Consumer Price Index for in August 2022.

According to him, the increase in US rates has also pressured the naira and making investors exit the Nigerian market.

Emefiele said broad outlook remains clouded due to headwinds of the Ukraine war and residual impacts of Covid-19.

He said the Nigerian economy will grow but at a “much subdued rate” due to the increased demand for money driven by the 2023 general election.

According to him, the rise in inflation over the past four months has been worrisome  stressing that loosening inflation would worsen Nigeria’s economic condition as well as naira depreciation.

He said a tight policy stand would help appreciate the naira.

According to analysts, the hike in interest rate for three consecutive times is a way of luring foreign inflows into the country and easing the pressure on the naira. 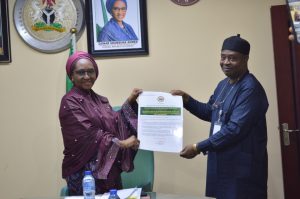 The Federal Government says it is set to deploy an Integrated Secure Track and Trace Solution to boost revenue earnings through excise and tax collection.

A statement issued by Ms Manji Yarling, the Acting Head Media and Publicity, ICRC in Abuja on Tuesday, said the project was aimed at mitigating the country’s dwindling revenue and foster more non-oil revenue streams.

“The PPP solution will adopt the Build, Operate, and Transfer option.

“It will allow the Federal Government, through the Ministry of Finance, to establish an effective and non-intrusive control on a broad range of goods and services subject to excise duty, safety, and standards,” Yarlling said.

While receiving the OBC certificate, the minister said the proposed solution was important at this time, as the government was currently constrained in terms of revenue and required an urgent boost.

According to Ahmed, the purpose of the project is to enable the ministry to have visibility over some key products that are made in Nigeria, in terms of the quantity and companies that produce them.

“It is also to differentiate between the same products produced in Nigeria and the ones that are imported, the bottom line is for us to be able to maximise our revenue potential.

“Having had several meetings with the proposing company, we thought that the best way to do this is through a PPP model and I am glad that the OBC Compliance Certificate has been issued,” the minister said.

Ahmed said that as the fiscal authority of the government, the ministry of Finance had the responsibility to ensure that duties and taxes were paid.

She said the ministry’s responsibility was also to assist relevant agencies to make their work more seamless, hence the need to deploy the solution.

The minister promised that the solution was not going to put more burden on companies, as the duties to be collected were not going to disrupt manufacturing in any way.

“I am assuring that the manufacturing companies’ businesses will not be disrupted, they are not going to incur any additional cost, the excise duty that will be charged will be a pass-through cost.

‘We are convinced that this is the right thing to do,” she said.

Ahmed expressed confidence in the solution citing that the same infrastructure had been deployed by the same company in South Africa and Morocco to boost their revenue accruals.

Ohiani while presenting the OBC, said that the solution would bring about many benefits to Nigeria including stemming illicit trade and revenue leakages; and improving revenue generation for government.

Other benefits he said include ensuring the circulation of high-quality goods and services; achieving economies of scale and synergies among ministry’s agencies; enhancing technology and knowledge transfer and generating employment opportunities.

“The proposed solution when implemented will allow the Federal Government of Nigeria to establish effective and non-intrusive controls on a broad range of markets.

“Markets such as goods and services subject to excise duty, and goods subject to conformity with health, safety, and quality standards.

“Additionally, the solution aims to reduce the levels of counterfeiting, sub-standard quality, tax evasion, and under-declaration in these markets,” Ohiani said.

He pointed out that the ICRC and the ministry would now proceed to the procurement stage.

“A Full Business Case (FBC) Compliance Certificate would be issued for onward submission to the Federal Executive Council (FEC) for project approval,) (NAN) 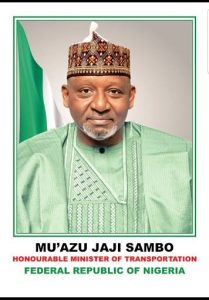 The Minister of Transportation Mu’ azu Sambo says Nigeria is committed to achieving greener shipping to attain sustainable development in the maritime industry.

Sambo said this in a statement on Monday in Lagos.

He added that Nigeria would join the International Maritime Organisation (IMO) to commemorate the 2022 World Maritime Day.

Sambo noted that Nigeria would not be left behind in the global move toward greener shipping.

“There is a need for stakeholders in the maritime sector to begin exploring ways to transition into a greener and more sustainable future,” he said.

On his part, the Director-General of NIMASA, Dr Bashir Jamoh, noted that the theme for this year’s world Maritime Day celebration was in line with the Agency’s mission of achieving cleaner oceans in developing shipping in Nigeria.

Jamoh said that NIMASA was already working in line with the call by the IMO Secretary General, Kitack Lim, for developing countries to adopt green technology.

Jamoh quoted the IMO Secretary General as saying, “The theme for 2022 World Maritime Day: New technologies for Greener Shipping,” reflects the need to support a green transition of the maritime sector into a sustainable future, while leaving no one behind.

“The theme provides an opportunity to focus on the importance of sustainable maritime sector and the need to build back better and greener in a post pandemic world.

“Nigeria, represented by NIMASA, as an active member state of the IMO is involved in the processes of creating new international agreements and protocols to address environmental issues such as marine pollution, oil spills and emissions from the shipping industry,” he said.

This year’s World Maritime Day theme is linked to the United Nations Sustainable Development Goals (SDGs), particularly SDGs 13 and 14 on climate action and sustainable use of the oceans, seas and marine resources.(NAN)

Share Post Views: 19 Four Governors from the Northwest and the governor of Maradi Region in Niger Republic on Tuesday...

Share Post Views: 21 The All Progressives Congress (APC), in Jigawa state has suspended the member of the state House...